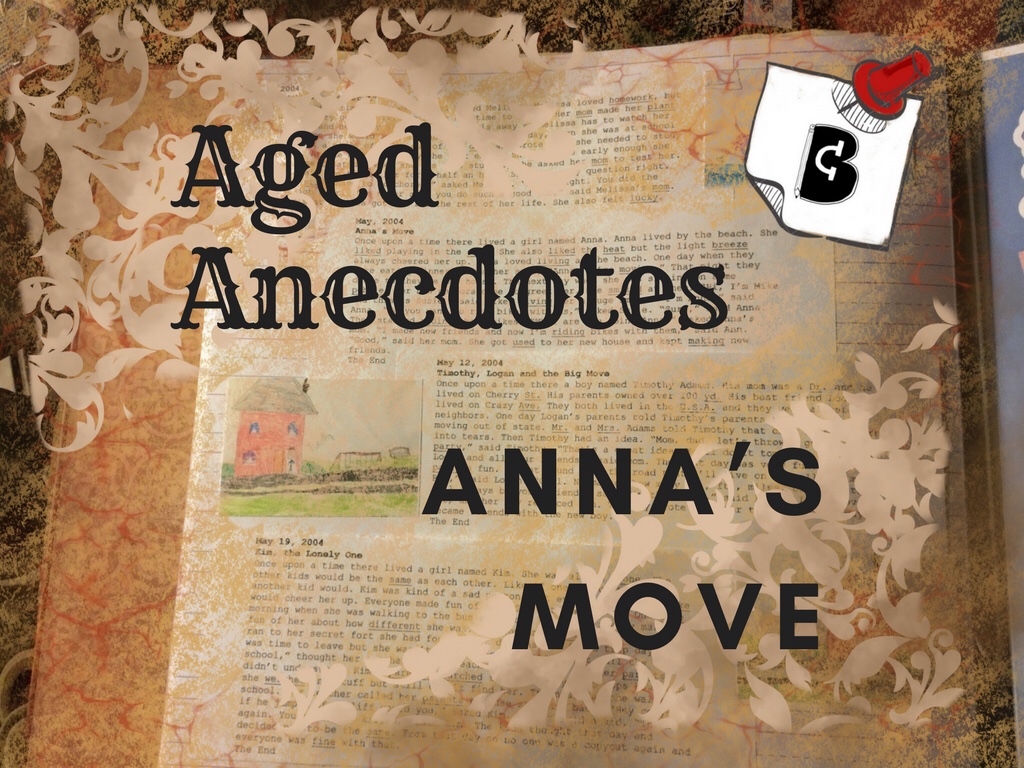 Once upon a time there lived a girl named Anna. Anna lived by the beach. She liked playing in the sand. She also liked the heat but the light breeze always cheered her up. Anna loved living at the beach. One day when they were eating dinner her mother said, “Anna, we’re moving.”  That night they drove to they’re [their] new house. The next day when she was sitting on some pebbles her new neibors [neighbors] came to greet her. She smiled at them. “Hi, I’m Mike and this is Susie,” said Mike, giving her a huge smile. “I’m Anna,” said Anna. “Do you want to ride bikes with us,” asked Susie. “Sure,” said Anna. They started riding their bikes. “What are you doing Anna,” asked Anna’s mom. “I made new friends and now I’m riding bikes with them,” said Ann. “Good,” said her mom. She got used to her new house and kept making new friends. The End

While some of this author’s other work has the tendency to be more fantastical–detailing the adventures of “creatures” and anthropomorphizing animals and their social lives–this piece is noteworthy for its very real subject matter. For kids, moving is one of the biggest fears they have: they are too young to have any influence on their parents’ decision, so the thought of being uprooted from all your kid commitments and relocated, totally out of your control, is horrifying! I can see how this could become a classic among kiddos who relate to Anna and her struggles.

So let’s go right into it. Anna seems like a very nice girl. She has an appreciation for nature and loves living by the beach, where she lives with at least her mother, although no other inhabitants are ever specified. Perhaps she has eighteen brothers and sisters. Anyway, Anna must be pretty mature because she enjoys the “heat” but also enjoys “the light breeze,” indicating that she somewhat understands the importance of balance of opposites. You wouldn’t appreciate the light breeze as much without the heat!

Anna is content with her life by the beach, until one evening at dinner her mom drops some news on her like a bomb. In fact, it’s so sudden, it’s almost suspicious. Although I admire how Anna’s mom doesn’t beat around the bush with her and just lays it all out, “Anna, we’re moving,” she then practically ends dinner to make this move because “That night they drove to their new house.” Why the sudden move, Anna’s mom? Why did you come out of nowhere with this news and have to make off in the night? You already know what I’m thinking: she’s running from the feds. Or, if not the feds, she’s at LEAST running from alien assassins. Like, Anna’s mom seems weirdly strict after the move and it’s probably because she has to be more careful now, she knows she’s in danger. Before, at their super luxurious beach house, Anna was playing in the sand and enjoying beach life, which, while is good for kids, is still dangerous–you gotta think, there’s literally a giant body of water just waiting to drown children. It’s sad and you have to be careful. But Anna was living that up and her mom didn’t seem to mind too much back then. But at this new house, Anna’s just riding a bike outside and her mom yells, “What are you doing Anna!” at her, when it’s pretty obvious when a kid is riding a bike that they are riding a bike. So naturally, I’m thinking that Anna’s mom has to be all paranoid and protective now because they were dodging whoever… or whatever… is after Anna’s mom. OR it could actually be after Anna, and Anna doesn’t know it but her secret power is…

To make friends? Because if Anna “kept making new friends” the rest of her life, I’m imagining some unstoppable charismatic abilities here. Most people make some new friends as they get older, but there’s a point where it kind of plateaus. But the way this was worded, I imagine Anna just rapidly accumulating more and more friends until she’s like Earth’s most best friend ever.

But, it’s very kind of the neighbors Mike and Susie to come over and welcome Anna to the neighborhood. It’s also a little suspicious, and I wonder if they had any intel that Anna was a wanted woman, but it’s very kind of them. We have no idea how old they are–perhaps they are a married couple in their 30’s just randomly coming over and trying to ride bikes with this stranger little girl. ALL I’M SAYING is that we can’t rule that out. They’re suspect.

Anyway, it’s nice that by the end of the story, we are finally familiar enough with Anna that we get to call her “Ann” for short now, and the story quickly ends with a couple details that make it seem like the story ends happily and that Anna (or, our girl Ann now) thrives in her new ‘hood. Hmm. I’m not convinced there isn’t a secret part 2 to this story somewhere out there, hidden in a treasure chest away from the feds, or destroyed by alien life form, but until then… I am happy for Ann, and I hope that after that day she never had to entertain herself by sitting on pebbles again.

So, for next week’s blog post, I’ll be discussing elements of the novel The Great Gatsby by F. Scott Fitzgerald in a podcast. If you wanna do your homework, review The Great Gatsby (I won’t count it as cheating if you watch the movie instead of read the book) so that you can kinda follow along better.

© BRITTANY COLE AND SLANTED SPINES, 2015-2023. UNAUTHORIZED USE AND/OR DUPLICATION OF THIS MATERIAL WITHOUT EXPRESS AND WRITTEN PERMISSION FROM THIS SITE’S AUTHOR AND/OR OWNER IS STRICTLY PROHIBITED. EXCERPTS AND LINKS MAY BE USED, PROVIDED THAT FULL AND CLEAR CREDIT IS GIVEN TO BRITTANY COLE AND SLANTED SPINES WITH APPROPRIATE AND SPECIFIC DIRECTION TO THE ORIGINAL CONTENT.