Once upon a time there were some animals that went to school. One of them was a shark. He was trouble. He was also very afraid. One day he did not understand a homework assignment about senses. He was too afraid to ask the teacher. When he got home his head hurt from thinking about why he didn’t raise his fin. After he did his homework his mom checked it. She didn’t understand it either. When he went to school the next day he told the teacher what he didn’t do. “You’re going to have to stay in for recess” said the teacher loud enough for the seals to hear it. The seals started laughing. The teacher threw nets on them. He was glad he wasn’t in danger. He learned an important lesson that day. The End. 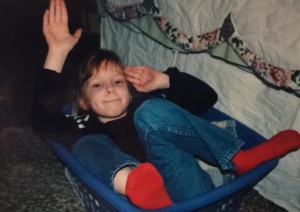 Part of the reason why it’s so fun for me to write these Aged Anecdote posts is that it allows me to get inside the head of my younger self and see the world from a premature inkling of my current perspective. It’s usually pretty magical for me because I can see the foreshadowing of the person I am today. This story serves this purpose for me as well.

“The Day Shark Didn’t Understand” begins as we pan into a classroom full of eager animal students. As we learn throughout the story, it’s a multi-species populous, and inclusive to sharks, seals, and as the illustration I provided depicts, also turtles. (I certainly hope bullying isn’t a problem here, because if it escalated, some animals may have the urge to eat the others.) The author draws our focus to Shark, who is apparently “trouble.” However, the author does not elaborate on why Shark is “trouble”; presumably, Shark is a trouble-maker, and is prone to shenanigans or other behavior generally annoying to teachers. (Although I’m sure 95% of students’ behavior becomes annoying to teachers over time.) Then, the author gives us some telling insight as to Shark’s nature: Shark is also very afraid. This comment makes me think that Shark’s troublesome behavior is motivated by his fear, and thus Shark is not an inherently “bad” shark, just not capable of handling his fearful emotions in a productive manner.

One day, Shark’s class is assigned homework that has to do with senses. While this may seem a vague and random subject for homework to fixate upon (and while the homework was probably only about “senses” because that was one of the author’s vocab words necessary to include in this story written for her own school assignment), it is actually very profound that Shark struggles to understand it. This is a topic that might require Shark to pay attention to his senses and feelings, and perhaps Shark is not used to allowing himself to be sensitive, because he is often afraid and copes with this by starting trouble.

Shark is too afraid to ask the teacher for help. Rather than put himself in a position of vulnerability and admit his confusion, he does not raise his fin. Rather, he goes home that day and gives himself a headache from dwelling on his fear and consequently his inaction. “Why didn’t I raise my fin?” he wonders over and over, causing himself to suffer. He attempts the homework anyway, and then asks his mom to check it for him.

Mom encounters something I’m sure countless other parents have as well, and that’s that she doesn’t understand the homework. Isn’t it frustrating when a kid in elementary school asks you for help with a school assignment, and you’re like, “Oh, awesome. A chance to show off my superior intellect to someone a fraction of my age. Finally, an opportunity to feel smart!” and then you hold the piece of paper in front of you and suddenly you’re sick to your stomach because little LeeAnn’s math homework looks more like someone typed a bunch of random numbers on a piece of paper and then a chicken ran across it. “What do you need help with again?” you ask, pulling at your tight shirt collar as sweat beads form on your forehead. “Well, I just don’t understand it,” LeeAnn replies, and then you think, “Crap. So, everything…” and you’re faced with the choice of either faking your knowledge and potentially teaching LeeAnn the entirely wrong strategy, or admitting you cannot confidently attempt this third grade math. And then you make your choice: “Well, LeeAnn, it’s pretty obvious if you look at it this way…”

Anyway. Shark’s mom is an honest woman, though, and she is not afraid to admit when she doesn’t know something, because she basically tells Shark (and I’m paraphrasing here), “Tough luck, I can’t help you there. You should have asked the teacher.” Clearly his mom does not share the same insecurity about admitting what she does not understand.

So, then Shark has to go to school the next day and face his scary fate: admitting he needs help. For someone who’s “trouble,” he’s pretty forthcoming about his academic struggles; he tells the teacher “what he didn’t do,” which is admit he doesn’t know how to do his homework. The teacher informs Shark that he will have to stay in during recess, which might sound like a punishment, and may have actually been a punishment in Shark’s eyes, but really how it appears to me—-as the reader—-is that the teacher was just going to dedicate that time to helping Shark one-on-one fully understand the homework. Which is a very, very generous offer. Think about it—-teachers probably love recess even more than students. A whole half-hour break from teaching, from disciplining, from hearing sniffles and coughs and little kids whining about how hard life is, even though they don’t have bills or jobs or pain-in-the-butt kids who need help with homework. No hearing turtles tattle tale on the otters, no yelling at the dolphin to keep his flapper to himself, no frogs that won’t stop croaking, even during “quiet time.” The teachers probably have a cutthroat system for picking who’s on recess duty and stuck chaperoning during their glorious refuge from students; it’s probably determined by gambling and betting, or by swordfight, with a bracket and everything. And for Shark’s teacher to sacrifice that half-hour of peace, away from her usual demanding responsibilities, shows that she genuinely cares about Shark’s education.

Unfortunately, the seals—-those darn seals—-overhear the teacher’s comment and start cackling, making fun of Shark for having to stay in during recess. As a child, having classmates laugh at you is one of the most mortifying experiences. You can show up to school wearing your favorite hat ever—-it’s colorful, and has one of those spinning tops, and in your head you feel like the star of your own TV show—-but the second someone clowns you for wearing it, suddenly you want nothing to do with it anymore. Mom finds it in the garage sale pile and asks, “Really? But this is your favorite hat!” And you’re like, “I just don’t want it anymore Mom.”

So for Shark, this could be the endgame. This could be the moment where he really learns to never ask for help again, because he gets teased for it. But thankfully, his teacher has his back.

And what does his teacher do? She throws nets on the seals to get them to shut up.

I don’t know what the laws are for animal public schools, but maybe throwing nets on students is acceptable. I mean, maybe because animals are more prone to following their instincts than logic and or moral obligations, something like throwing nets upon students is a standard way of dealing with misbehaving seals, but to me, this could hilariously potentially be student abuse. I love that the teacher, who is a turtle, uses a human-made capturing device to quell the peanut gallery remarks from the seals. The whole animal hierarchy in this story is interesting, because Shark, who is a shark, is the most insecure character in the story, and he could easily just say to himself, “You know what? I’m a shark. When I grow up, I’ll just eat them all. That’ll show them!”

But the teacher throws nets on the seals—-hopefully, just for the duration of a “time out”—-and the lesson in this story begins to materialize in Shark’s mind. He’s glad he’s not in danger, which makes me wonder if Shark actually thought the seals or even the teacher were going to attack him in any way for needing help with the homework assignment. What a horrible system: “Oh, you don’t understand the homework? Chomp.”

However, if I were to extract a lesson from this story, it seems to be that those who may seem like “bad” people, sort of like how the author described Shark as “trouble,” are really just individuals who are suffering in some way. Maybe Shark acts out and causes discrepancies in class, but it’s not because he has no heart or feelings; it’s because he actually has a lot of feelings, but he doesn’t understand how to deal with them. Maybe if we were in Shark’s position, we would feel and do the same, if we didn’t know any better. That’s a part of growing up and learning how to be emotionally responsible, and I’m glad Shark’s teacher is able to see the seed of good in Shark and step up to help.

The major lesson in this tale, though, is that it’s okay to ask for help. When Shark didn’t ask for help, he suffered alone, and after school, he spent the entire evening regretting his inaction and struggling over the homework. Often times we isolate ourselves when we encounter struggle, but if we simply reached out to a friend, or a teacher, they may help alleviate that suffering, even in a small way, such as listening carefully as we express our feelings. We are a part of a teeming community of life and turning to and connecting with our neighbors is important. It’s an opportunity.

Plus, Shark’s fear was completely constructed in his mind alone. Sure, the seals laughed at him, and having others laugh at you can be scary, but is that really something Shark had to be afraid of? Shark does not need to be intimidated by those pesky seals; Shark is a shark, and those seals pose no actual threat to him. This is a helpful reminder that those who may seem like they are bigger and mightier than us, really may only seem like that in our perception, and that we should not underestimate the power that lies in our own heart.

© BRITTANY COLE AND SLANTED SPINES, 2015-2021. UNAUTHORIZED USE AND/OR DUPLICATION OF THIS MATERIAL WITHOUT EXPRESS AND WRITTEN PERMISSION FROM THIS SITE’S AUTHOR AND/OR OWNER IS STRICTLY PROHIBITED. EXCERPTS AND LINKS MAY BE USED, PROVIDED THAT FULL AND CLEAR CREDIT IS GIVEN TO BRITTANY COLE AND SLANTED SPINES WITH APPROPRIATE AND SPECIFIC DIRECTION TO THE ORIGINAL CONTENT.